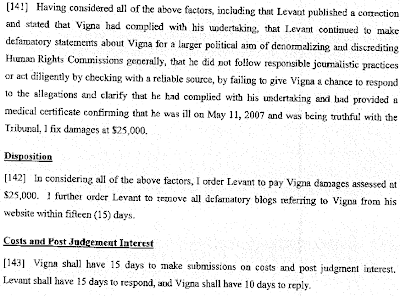 I've written about this particular defamation case against Ezra here. I've got the entire ruling but have only scanned through it. If someone else hasn't uploaded the whole thing by tomorrow, I'll see what I can do. I'm especially interested in finding out whether it refs this post of mine. If it does, then next time I'm in Ottawa Viggy owes me a beer.
Just as a gloss, that Ezra was going to lose this case was obvious from the get-go. I would implore some of the other people who are getting sued because they listened to Levant and somehow thought he knew what he was talking about when he was talking about Canadian defamation law...surrender and do a deal now. He's like the piper leading you down the road to personal destitution.
PS. Here's a link to the whole decision.

Posted by bigcitylib at 6:55 PM

Are you discounting an appeal?

The judgement is pretty damning.

Don't listen to BCL. I have it on good authority he huffs glue. Keep fighting free speech warriors. You can do it!

I am not familiar with case or the number of steps or delays one can put in place.

Do you have any background links etc to shed some more light?

Well you can check the links through the main post to what I've written previously. You know my biases, but the basic information is all there.

Thanks BCL, I have no problem with your bias, it makes for some interesting analysis through those rose coloured glasses.

Do you think the Maternal Health debacle (funding for abortions in the 3rd world) will have any affect in Winnipeg or Vaughan?

Thats pathetic. Focus on Ezra, and his bleak future. Thats what this post is about. Concentrate!

It is not pathetic to enjoy reading Lib blogs and their version of reality. Some of us find it entertaining.

My reality is includes a non-partisan study that included the loss of Catholic voters for the anatomy of Liberal defeat.

It appears the LPOC are having some difficulty with their balance sheet and finding volunteers to help on the campaign in these three by elections.

I am not a trained lawyer and the thought of reading legal arguments of Ezra vs Vigna is not on my bucket list.

Are you going to help in Vaughan?

Well, at least now we know why Ezra doesn't actually practice law (or not very much)

Wow, not only did Levant lose but he lost to a "self-represented" Plaintiff!

I kinda had a feeling it was going to happen this way.

The judge did discount a good chunk of what Vigna asserted was defamatory.

But, being in the room for most of the trial, I had a feeling the judge wasn't buying the supposed distinction between lying and fibbing.

I am not familiar with case or the number of steps or delays one can put in place.
Just another Conservadroid spouting without knowing any facts I see....

When you think about it, how would anything Levant have to say about anyone harm their reputation in the eyes of a reasonable person? I'm kind of surprised he lost.

An interesting decision in the sense that even the biggest loser lawyer can't be called a "fibber". Which, so long as he is in the capacity of lawyer before a Tribunal, makes a great deal of sense. Implausible as Vigna's lovely claim of loss of serenity may be, Ez failed to prove that it was BS. Point to Vigna.

It is a really interesting decision because it walks through the various defences which will come up whenever lucie mans up and pushes his many bits of litigation forward. It sets a very clear, but low, bar for "public interest". It suggests that smart people will cross examine Stacey, his helpers, and Vigna on the question of Jadewarr. It pays attention to Grant.

Lots of room for appeal but, realistically, Ez was yellow carded for a minor foul. Time to suck it up and move on.

This sideshow is over. Vigna wins and remains a tool. In the main event lucie is trying reduce discovery by dropping back to the small claims court standards of simplified procedure.

The CHRC and the CHRT have entirely ceased attempting to prosecute or decide s. 13 complaints. The CHRA vis a vis speech is a dead letter.

By all means celebrate Vigna's windfall. I know I would if the case had gone the other way.

Love the free legal advice, Jay. Keep it up.

The CHRC and the CHRT have entirely ceased attempting to prosecute or decide s. 13 complaints.

How do you know this, jay. Perhaps there haven't been any recent s.13 complaints made or perhaps the CHRC has decided to do preliminary investigations of complaints--to determine if valid--before notifying the party named in the complaint.

The Topham case is on hold until the Warman v. Lemire thing gets settled in court. Other earlier cases are still being enforced. Warman may have filed another S-13 recently, but I'm not 100 per cent, and I think there is one ongoing in NB--don't know if thats through the CHRC or a provincial counterpart.

"An interesting decision in the sense that even the biggest loser lawyer can't be called a "fibber"."

It is nice of you to point out you do not understand the ruling. Levant was trying to hide behind some sort of weak definition of "fib" as not being quite the same as a lie. The court held that when you are referring to a lawyer, who has a professional ethical duty to be candid to the court, trying to hide your allegation of lying behind weasily words just will not work.

See, J, the problem is not that he called a lawyer a fibber. The problem is the facts are that this lawyer DID NOT LIE. When you suggest a lawyer is lying in court, you are deliberately trying to harm their reputation.

The truth is a full defence, so had VIgna actually lied Levant would have won. I know it must be hard for you Levant fans to come to grips with the reality that he is a loser, but he is. He really really is.

hoping that it wall end in peace talk,