The Illustrated Guide To Tory Turmoil

OTTAWA - A former MP says he and many other Conservatives in his Manitoba riding are upset with how the party handled finding his replacement, calling the nomination process there undemocratic

Mark said in an interview that he purposely announced he was leaving a year early, so that the party would have time to hold a competitive nomination process.

Instead, only a single nomination contestant — Robert Sopuck — was ever recognized by the party, despite other local Tories wanting to run.

Mark said he complained about irregularities in the process to his Manitoba caucus colleagues at least twice.

"After spending over 13 years in the riding, not allowing the membership base to have a say in who should replace me is just not right, and not one of (my fellow MPs). . .would utter one single response," he said.

Inky is hardly the first to complain, though. Every since they came to power in 2006, the Tories have been wrestling where their Reform Party instincts in regards to local democracy.

For example, most of the Calgary West riding association quit after CPoC Central quelled their attempts to replace Rob Anders with someone less embarrassing.

Gilles Rancourt complained about the "Party Brass in Ottawa" stifling his bid for the federal nomination in London-Fanshawe, and eventually left the CPoC.

And then there was The Blue Network, a short-lived reform movement within the CPoC that worked towards restoring "grassroots democracy" to the party. It went nowhere.
Opposition to Lisa Raitt's parachute candidacy among Halton Tories was legendary. Local Tories even whomped up an anonymous website urging her defeat in '08. She won anyway.
Ken Epp refused to endorse Tim Uppal in 2008 when he was parachuted into Epps old (Edmonton) riding. Uppal won the seat regardless. 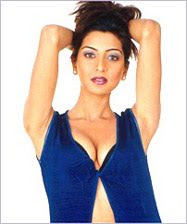 But perhaps most tragically, nine directors of The Mississauga East-Cooksville Conservative Party executive quit when smoking hot Melissa Bhagat was selected by the Tory braintrust in Ottawa to run in that riding. She lost.
That's all I can remember; I'm not sure the protests against Julian Fantino count because I'm not sure the opposition comes from local Conservatives. But here's a link anyhow.
PS. I think this is the only website on the planet that still has this particular picture of Ms. Bhaghat. I believe she had it pulled from the original source after she was nominated.

Ah but all will be forgiven because Harper is a winner. You know, unlike those other Tories like Joe Clark or Robert Stanfield ...the ones with integrity, intelligence and were democrats of the highest order.

Interesting post. How did the liberal leader secure his riding?

Why was he parachuted in a safe seat? J.T. earned his seat and beat out the Bloc.

Warren Kinsella and some insiders have raised the issues about locking the doors early from other candidates.

Reminds of another time in 2008 Bob Rae protesting how insiders were not allowing a leadership contest to select their party leader.

Speaking of hypocritical, maybe CS can refresh our memories. How did the CPC react to Ignatieff being "parachuted" in again? What was their response to Dion's idea of appointing women candidates? What was Harper saying about grassroots democracy and accountability?

You should ask those questions directly to our PM.

I was asking a fellow blogger who was being inconsistent.

Gayle feel feel to publish your own blog and share your wonderful ideas from the left.

The LPoC is not committed to "grassroots democracy" within the party to anywhere near the same extent as the CPoC has claimed to be in the past. THEY are the ones committed in theory to a principle that they ignore in practice. Hence they are the hypocrites.

As irrelevant and off-topic as usual.

BTW, what would you call a Canadian Conservative if they were parachuted to run in a US congressional district?

A Democrat, and a pretty liberal one at that. Think about it before you disagree with my analysis. Our two nations don't compare nicely politically speaking.

And don't forget that Ezra Levant was the duly nominated con candidate in a Calgary riding until some guy bumped him off.
He coulda been on a leash all these years.

Speaking of suits I would like to introduce yo dinner jacket from mensusa.com

Every woman deserves to wear the shoes to match her dress, elegant and delicate look at her feet bound. Whether they are lace, or clear each platform heel shoes recognition and praise of the equipment, so that women love the feeling of walking and sexy. When it comes to their pandora charms uk fun and flattering high-heeled shoes, they make women feel special authorization, and high confidence no matter when or how to wear.

Christian Louboutin shoes have become the most popular reason is that famous trail. You will see all these fabulous designer shoes on species A-celebrities. Just pick up any fashion magazine and see if they like Naomi Watts, Nicole Kidman, Janet Jackson, and beautiful people wearing them. You may even find a young actress wearing them too. I think if your feet are large enough, then the age is not a problem.Since 1992, these shoes were conceived charming boutique in Paris. Since the concept, Louboutin shoes have been made into wholesale clothing for women
a design, color, shape and style varieties, won the first choice for millions of women around the world. With this success, his shoes will definitely see a variety of different types and backgrounds dressed women. In particular, because they are less than the retail prices available online. From Los Angeles to Hong Kong, for these women's shoes will be the top for any woman who is good taste and design clothing choices. His products can be found in the residential and commercial New York and London, a number of boutiques.

High-heeled shoes that are fashionable women's footwear `which` cause the wearer's foot significantly improved their toes. Create a beautiful high heels shoes, slim, softer numbers. They are in a favorite style and high heels, pumps, block, tapered, wedge-shaped leaves of different shapes range.The low heels are preferred, in the late 70s, late 80s back fashion high heels and early 90s. During this period, fashionable heel christian louboutin uk shape change, from the block (70), conical (90) and high heels (80 and 2000). In recent times the kitten heels of different heights from the heel to 4 cm or 10 cm or more spike heels high heels. Wearing high heeled shoes is higher than 13cm aesthetic reasons, without regard to practical everyday wear.

It is no doubt that you should learn how to walk responsibly and carefully in women heels, in particular, high heels. We need some practice before we take our high heels out.

We will introduce some simple tips for washing your women heels.Washing women heels with blankets and towels. For they can prevent the washer from getting off balance. Never brush women heels in shoes brush. Brush can not be used for heels for most heels are made of leather or artificial leather. Don't throw your heels into a washing machine. Washing women heels in a washing machine is stupid. If this is an expensive tory burch shoes sale pair of women heels, you may need hand them over a professional cleaner.Stuffing heels with waste paper or newspaper well to avoid heat and sunshine. And they can speed up the drying process. And don't put heels in bright or direct light. Bright light can bring damages for heels.Scrub women heels. You need not immerse women heels into water, you can just scrub them in the sink with soap or sponge them lightly.

Do you like shopping on the Internet？Most of girls will say "yes". As the quick development of the Internet, there're lots of refresh things comes out like the on-line shop, you can find any on-line shop you want throughout the world, and now you need just press the button of order, and then the goods will be delivered to your place which is amazing.